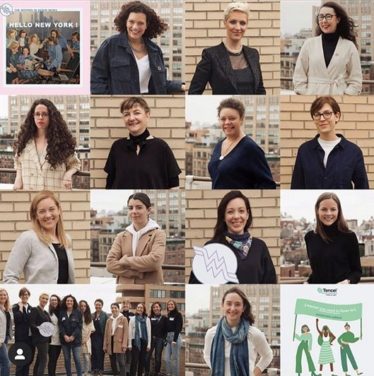 A dozen female denim-industry insiders (and two males) gathered on Friday, March 6 at the first New York-based event of Women in Denim, the network created to empower women in the denim sector that is supported by the trade fair Bluezone, the denim mill Artistic Milliners and Tencel fibers. The meeting was held in honor of International Women’s Day, which was marked two days later, on Sunday, March 8.

Following a welcome breakfast, the attendees took part in a roundtable discussion moderated by Angela Velasquez, the executive editor at Rivet Magazine, and our own Sabine Kühnl, editor-in-chief of SPORTSWEAR INTERNATIONAL. The lively and at times very personal talk focused on a variety of topics and challenges that women face working in the blue world–and how things have improved but still need to get better.

Lucy Germser, the boss of Sphynx, a cooperative specializing in brands and branding, opened the discussion and explained how she recently divorced her husband and business partner and set out on her own. She said that it was especially frustrating that when journalists covered their company that they always wanted to interview him, not her. “For them it’s normal to talk to the man instead of the woman,” she noted. She added that the day’s gathering would be useful to all: “It’s so good to share stories because it makes you feel stronger–and stronger together.” She then shared some sobering statistics about women in the world including the fact that women earn 24% less salary than men and that women’s televised sporting events account for just 16% of those that are aired. Circling back to the denim world, she stated another cold, hard fact: “You never see a [denim] factory run by a woman.”

Michelle Branch, a longtime industry veteran who owns Markt & Twigs, said she had to overcome three challenges in her early career working at mills: “The fact that I was young, female and black.” She added that she “had to earn the respect” of her all-male bosses. “You’re always going to have to push back a little,” she summarized. But she’s generally hopeful for the future. “I hope to God that things are changing,” she said a few minutes later.

Tricia Carey of Lenzing said that cultural differences can also be a challenge in addition to gender-based ones and said that being an American working for an Austrian company sometimes still takes adjustment and understanding. And noting that mills in the EMEA treat women differently due to religious and/or cultural reasons, she said that both parties must be diplomatic. “East and West must respect each other’s cultures but keep the human side,” she advised.

Ebru Ozaydin, SVP of sales and marketing at Artistic Milliners, pointed out that gender discrimination and workplace abuse isn’t necessarily always committed by males. “Sometimes it’s about being a woman but I think it’s really about being human,” she said and added that female bosses can also be bullies. “We definitely have to be different from what it was before,” she said. And Kara Nicholas, a 20-year veteran at Cone Denim, agreed. “I think we have a lot more to do,” she said.

Other topics discussed were the challenges of raising children as a working mother, the importance of mentorships and sponsorships and working together for respect and female empowerment.

Other participants in the event included Asya Ozuler, who assists Ozaydin at Artistic Milliners; Alison Wohl, head of sales and marketing for the East Coast at Orta Anadolu; Erica Redd, who supports Carey at Lenzing; Holly Brown, founder of Clockworks Press and an art teacher at an all-girls school; Pierrette Scavuzzo of Cone Denim and Sebastian Klinder, the head of Bluezone.

Women in Denim plans to hold its next event in Istanbul, Turkey at a date to be determined.